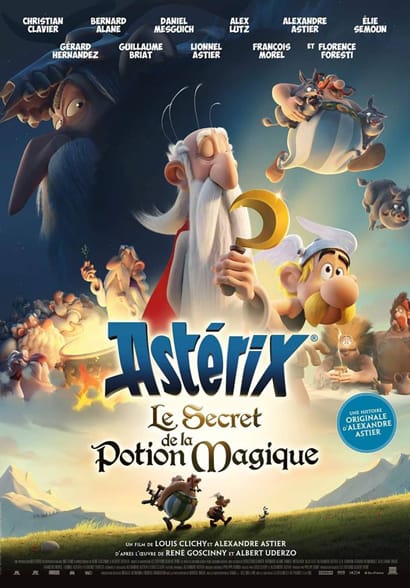 When Getafix falls from a tree while picking mistletoe he realizes his reflexes are not as sharp as they used to be, so he figures he is getting old. He decides to look for a successor.

With Asterix and Obelix on his side, he will embark on a quest across Gaul to find a druid worthy of knowing the recipe of the magic potion.

Directed by Alexandre Astier and Louis Clichy, Astérix: The Secret of Magic Potion is an animation based on an original story written by Astier, suitable for both children and parents. The story is enjoyable, funny, but with not so much depth, from my point of view.
Unlike Astérix: The Land of the Gods, in the new animation, Julius Caesar and the Romans are no longer at the heart of the story because the film aims to reveal the Gauls world outside the village and at the same time to offer more information about Panoramix's youth period and about his famous potion.

Asterix and Obelix have always had something special. Although the films with Gerard Depardieux were very good, the present animation captivates you being mature built and this was also seen in the cinema where parents, sometimes, were more captivated by the action than children, having many dialogues and scenes with much substrate.
Alexandre Astier has done his homework by introducing one-piece texts (also known as one-liners), musical and modern references to complement a relatively simplistic scenario...

An asset of these films, of this series, is that you do not have to see the previous movies or have seen them in some order. The action is timeless, the characters seem to be the same as we know them – younger or older. It's like a time lock: the characters are the way you left them, neither younger nor older, nor more informed, neither dumb nor stronger nor weaker. Everything is the same, everything is built into the same internal logic of the series.
So, the new Asterix: The Secret of Magic Potion is as you always know. But exactly for this reason you have to go see it.